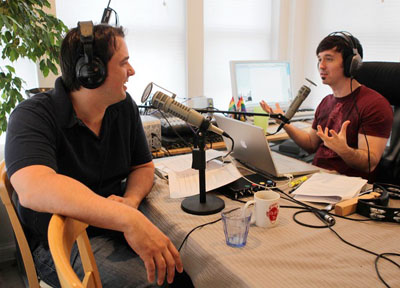 Fausto Fernos and Marc Felion spend hours each day in the breakfast nook of their North Side apartment, chatting behind microphones, laughing and crafting a daily, hourlong podcast that goes out to tens of thousands of listeners across the country and around the world.

“Feast of Fun,” which the couple launched in rudimentary form in 2005, has grown into one of the Web’s most popular gay-themed talk shows. It has also provided Fernos and Felion with full-time jobs and a certain acclaim for helping pioneer the now-booming field of Internet broadcasting.

“They were very early into this,” said Todd Cochrane, the founder and CEO of RawVoice, a Hawaii-based new media company that helps podcasters distribute and monetize their work. “What’s unique with them is they kind of helped lead the way into the (lesbian, gay, bisexual and transgender) space. Their show has really evolved, and they now have a huge and very loyal fan base.”

Podcasting in general has exploded in popularity – a 2009 study by Edison Research found the number of Americans who have listened to podcasts has doubled to 22 percent since 2006. But for people in minority communities who don’t always see a reflection of themselves in mainstream media programs, this new medium has become particularly attractive.

“In the mainstream, LGBT is pretty much on the fringe, but the podcasting community can allow a wide variety of types of people to have a show and to have a voice,” said Patrick Powers, co-host of another popular Chicago-based LGBT podcast, “PNS Explosion”. “Podcasting has filled a void that LGBT people have rushed into, both as content producers and consumers.”

Fernos and Felion met at a bar in Chicago in 1999 and swiftly fell in love. Felion was managing a restaurant and bartending and Fernos was running a roving cabaret show called “Feast of Fools.” They began working together on the show and, as the new media landscape began to expand, they added a podcast to promote “Feast of Fools.”

Fernos is a self-confessed gadget addict and found ways to make their podcast’s sound and production quality unusually high-end. Before long, the podcast become more popular than the cabaret show, so the couple re-directed their creative energy into a daily talk show that focuses on issues both lighthearted (the lives and times of famous drag queens) and serious (AIDS and the fight for same-sex marriage rights).

As their audience grew, they were able to attract advertisers, earning enough to abandon regular jobs and produce the show full time. They changed the name to “Feast of Fun” and began expanding their reach, drawing in bigger-name guests and building an audience that now routinely hits 70,000 people a week.

“So many people criticize the Internet for depersonalizing humanity, but I see it as the great liberator,” Fernos said. “I feel like podcasting is like the real ‘American Idol.’ People that are doing what we do are succeeding against major companies and corporations. If you go to iTunes and type in ‘gay’ under podcasts, we’re the first thing that pops up.”

Not that fame in the world of podcasting translates to riches.

“It has been a struggle to make ends meet,” Felion said after taping an hourlong interview with a guest for the next day’s show. “We’re just getting by by the skin of our teeth. But it’s working; we feel like we’re building something, and it’s something that a lot of people really like.”

Jason Smith, a multimedia producer at the University of Chicago, said he began listening to “Feast of Fun” shortly after it launched.

“In the very early days, you’d go on iTunes and start listening to podcasts and somebody would record one show and that’s it, and it would sound like someone recorded it through a tin can,” Smith said. “But these guys came along and they were funny and they sounded great. Fausto basically took the live show he was doing and shoved it into the iPod and broadcast it out into the world.”

“These guys were definite pioneers,” said listener Rick Aiello, a graphic designer at a Chicago law firm. “I kind of look at them as the Oprah of gay podcasting, in a way.”

But success in this arena comes with considerable work. If they aren’t on the phone doing their daily guest interview – they’ve had RuPaul, Debbie Reynolds Kathy Griffin and a host of other celebrities on the show – Fernos and Felion are scanning headlines for topics to discuss, corresponding with fans via Twitter and Facebook and maintaining their expansive Web site and blog.

During a recent interview with Steven Petrow, author of “The Essential Book of Gay Manners and Etiquette,” Fernos and Felion talked about how technology has changed dating and the art of flirtation. The pair played easily off each other, alternating questions and smoothly driving the conversation where they wanted it to go.

Their rapport is as much a well-practiced part of their professional life as it is a true expression of their relationship. As much as the show spills into their day-to-day personal lives, the fights and foibles all couples face often make it onto the show.

“It’s part of why people listen,” Felion said. “They want to hear different points of view.”

Fernos added: “We put so much of our personal lives into what we do that our fans think they’re really our friends. When we meet them, we have an instant connection.”

Powers, of the PNS Explosion podcast, contends that dynamic is part of the appeal of this medium, particularly among people in minority communities.

This site uses Akismet to reduce spam. Learn how your comment data is processed.